Has anyone heard word if any of the shows were filmed for DVD release? I have fallen in love with "Ultra Violet" all over again after seeing them in Toronto, and can't wait to see a performance of it again.

Some pictures from show at FEDEX Center, MD. 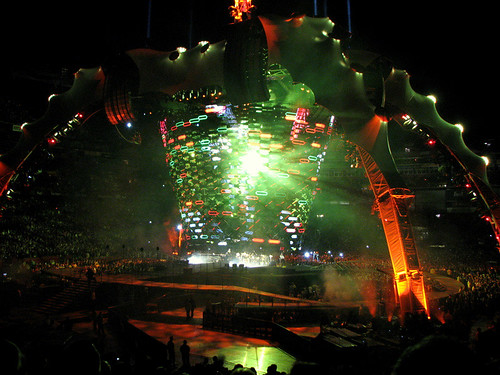 1) Any news on that OTHER U2 album they spoke about while doing press for this one? I thought they would bring it out later this year?

2) Also doing press when they spoke about touring they said they wanted to end up on the west coast before the end of the year. And they would hit the road again in the US early 2010. Any news on that other then the Euro shows?

3) Someone spoke about the dvd think they will also have a Blu ray version?

And as a side note there may be a slight chance i may be able to get a ticket for the show this sat. cross your fingers. tell me about the cheap seats any fun stories the seats from behind the stage are what i am getting on tm. any stories on those hows the view and so on.
Collapse